As a newcomer to the DMDirc project, I’d thought I’d introduce myself. I’m Chris ‘laser’ Northwood, and just before the releases of the 0.5 release candidates, I was asked by the other developers on DMDirc to become the QA Lead.

My approach will hopefully become fully implemented for the 0.6 release, and we’ll hopefully see this by having fewer bugfix releases (particularly, less release candidates), as I did not have enough time to implement this for the 0.5 release.

My experience in testing is mainly in functional testing (I’m currently working as a Test Engineer for Sophos, a computer security company), so I’m going to be mainly concerning myself with functional testing, leaving the current unit testing approach to be worked on by the other developers.

The biggest problem I’ve found since joining the DMDirc team is a lack of documentation, which is essential to ensure a good set of test coverage. Greboid has so far developed a pretty good functional specification for the UI, which I can work from, however there are a few other changes I’m hoping to make to ensure the focus on QA. First off is a “Requirements Dashboard”, matching new, changed and existing functionality to a specific requirement, allowing us to check dev status and test case coverage for a specific requirement (see, this mockup dashboard).

Each requirement should have a test case to verify the functionality before testing can begin to ensure a good testing strategy to increase quality of the DMDirc releases.

We currently use a handful of different tools (specifically, Google Code Issue Tracker and Litmus) for QA, which although are good on their own, do not necessarily integrate together well, which is where my dashboard idea is hoping to pull them all together.

I’m also hoping to change the release strategy of DMDirc. Currently, testing is continuous on feature incomplete nightly builds, and release candidates are generated as soon as DMDirc is feature complete. Some of my changes are mainly semantic, but should hopefully clarify the process.

I’ve created a workflow to hopefully show how I intend this to work: 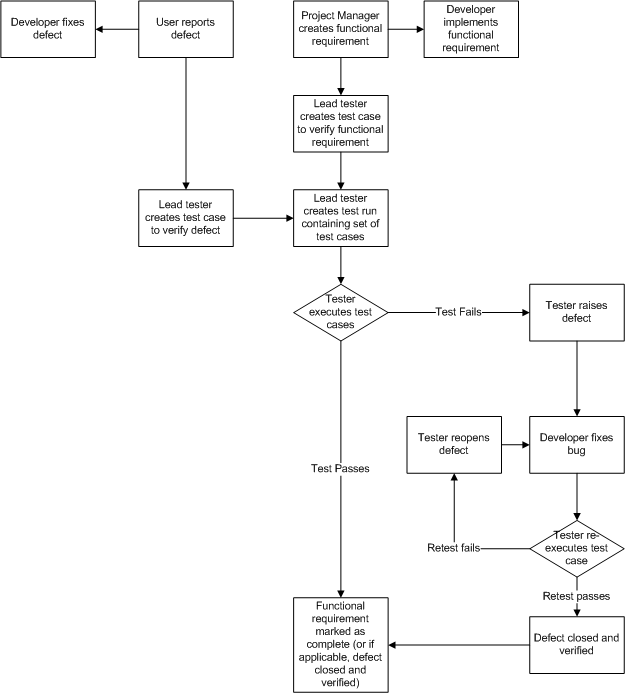 This is not too dissimilar to the current process, just slightly formalised.

Hopefully I’ll be able to implement this with no real trouble, which means that come 0.6, you’ll be able to see the benefits in a more bugfree release.