As part of our aim to make DMDirc into a good, cross-platform IRC Client, it was decided early on that it required an actual installer to make packaging/distributing/installing the client much easier.

Originally this was scheduled for 0.7, but just prior to the release of DMDirc 0.4 we rescheduled it to 0.5 and it was assigned to me (as I had the least other tasks to do - the main bulk of the parser is complete).

So since we released 0.4, I have been working almost entirely on this, and can happily say the first revision of the installer is completed.

One of the key requirements for the installer is that it should run on all the (desktop) platforms that DMDirc runs on, which right now are Windows (2000, XP, 2003, Vista) and Linux.

Below are a few screen shots showing the installer running on XP (using both Classic and Normal themes), and Windows Vista: 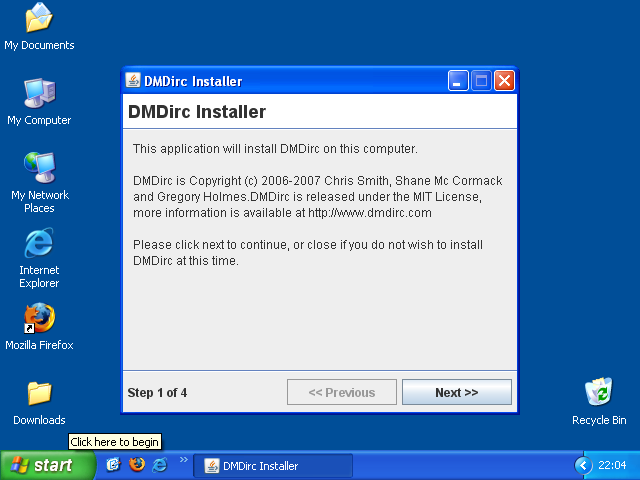 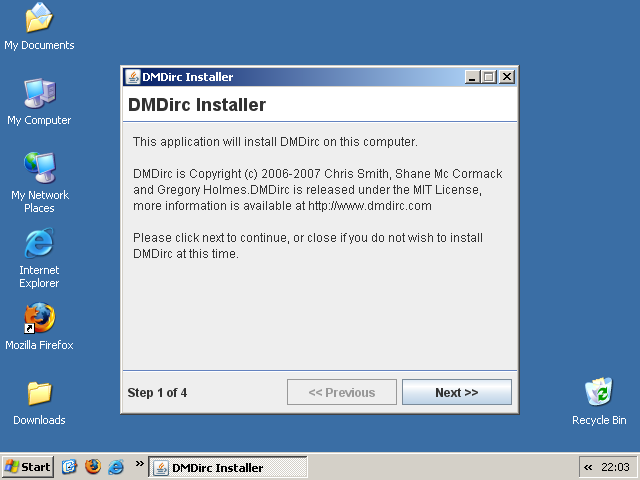 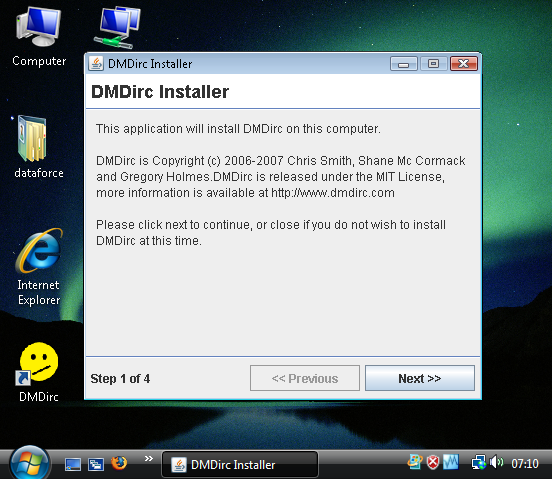 Mac users may note that there is no Mac Version of the installer. This is due to the lack of availability of a Mac to test on, and the lack of a proper release of Java 6 for OS X. I am hoping to have the installer running on the Mac for the first release after Java 6 becomes available properly (although the lack of a Mac for testing could make this awkward - donations welcome!)

At the moment the installer requires Java 6 to be installed on the machine already. If the installer is ran on a machine without Java, or with a version that is too old, it will notify (via console in Linux, or a dialog box on Windows) the user that they need to install or update Java first. One of our goals for DMDirc 0.6 is to produce a version of the installer that bundles Java 6, or can download it for the user.

This section of the post assumes you actually care about what I have to say about the installer and how it works. I care, and I would enjoy reading this, but most people probably won't. Don't read on if easily bored!

First off is the main portion of the installer: the Java code that actually does the installing. This is, of course, the same on all platforms (just enabling/disabling bits that are not appropriate for the platform, etc) and is a rather simple case of copying files from the temporary location they were extracted to, to the location the user wants them to be, followed by platform-specific code to create shortcuts to the files.

The real fun part of the installer is the platform-specific launcher code that was developed for the task, this was my favourite part of the whole thing!

The Linux version of the installer is a special file, (installer.run) that has a bash shell script at the top, and a TGZ file appended at the bottom. The first thing the installer does is to MD5Check itself by cat’ing itself to md5sum (if available) or alternatively running md5sum on installer.run.md5 if it is found, once the check is complete (and is the same) the installer pipes the tgz part of the file to gunzip and tar, and finally runs the installer. (To create the installer, the reverse is done, the bash script part of the file is created, then the files are tgz’d and cat’ed to the end, followed by the MD5 sum being produced and added to the file)

The Windows part of the installer is slightly more complex, in part due to Windows not having as nifty a thing as bash included by default. However this was worked around. The front-end to the installer is a simple freepascal-compiled exe that includes a 7zip self-extracting archive as an RCDATA resource, which is then extracted and executed. The original launcher terminates leaving the 7zip extractor “on its own”. (The main/only purpose of this exe is to brand the installer as DMDirc, not as 7zip, and in future to check the MD5 sum of the 7zip extractor file). Once the files are extracted by 7zip, another exe (also freepascal, and cleverly dubbed “setup.exe”) is executed, this checks for the presence of Java, and attempts to run the installer, alerting the user if it failed. This is slightly less interesting than the Linux one, but I am still quite impressed that it works as well as it does. (To create the installer, setup.exe is compiled, and then a .7z archive is made of setup.exe and the other files that are needed, these are then bundled with the 7zip self-extraction stub, leaving the file “extractor.exe”. This is then added along with the DMDirc icon to a resource file that is compiled into installer.exe. The MD5 hash of extractor.exe is also included. The final exe is then digitally signed before being made for download)

The actual process of creating the installers is all automated by four shell scripts (release.sh, makeInstallerLinux.sh, makeInstallerWindows.sh, makeLauncher.sh) and is done by using the commands

This saves having to remember the processes required to produce the exes, and makes releasing easy.

To produce the binaries above, the following command was used:

The output of this command:

As you can see, the scripts do everything automatically, including downloading the two extra files needed for windows (7zip sfx stub, and shortcut.exe)

That’s about all I can think of to say about the installer, so feel free to try and break it (and report any breakages as an issue on google code).